I was thinking about I could write my as my little monthly post in this sketchbook just when I saw a new comment coming -through email notifications- to my main website, The Russian Lullaby in one of my last articles about migration debugging in Drupal. Specifically, the comment is a query about patching a Drupal module, since the article includes a section where the module has to be patched in order to work fine (at least earlier, for certain versions prior to the last one). So I thought I’d publish a little post about Drupal patches applied from Composer.

Two years ago, I wrote my first article about Composer and Drush for Drupal here in my medium profile: Composer and Drush in a Drupal context (Well, in spanish / castilian, my primary language). Since then I had also been thinking of writing about Composer in english too, but the self-imposed pace of at least one article per-month along with contributions and training (for myself) prevented me from doing so. Now is the time!

Just now I have an debate/conversation with Matt Abrams, my Digital Ocean editor, about the use of Composer for Drupal projects. Essentially, I couldn’t imagine working with Drupal now without using Composer. Well, I can imagine because sometimes I work on Drupal 8 legacy projects without being composerized platforms -and it’s something that hurts too much- Ouch >< !.

Composer is a command line application built with PHP, launched in March 2012 and focused on the management of dependencies in projects based on the PHP language. It’s based on previous ideas from other dependency managers already available for NodeJS (npm+ ) or Ruby (bundler+ ) and tries to bring the same concept to PHP language based environments.

Ok, Composer is a dependency manager and deals with packages, libraries and resources of different types. But in addition, it is possible to interpret an initial installation as an initial unresolved dependency, so it can also be used as an initial Drupal installation tool.
We can say that Composer consists of two key pieces: on the one hand a command line tool to manage these dependencies and interact from the terminal console and on the other hand a repository where the packages are stored called Packagist.org.

In between, there’s an element that usually connects them both: a composer.json file that records the needs of each project to respond as a command tool log, which relies on these annotations to request packages and dependencies from the repository. In addition to this .json file there is another file called composer.lock. What is the latter? It’s a log file, like a notebook where Composer notes the exact version that has been installed of each library. This is Composer’s way of stabilizing a project in a series of specific versions of its dependencies. Thus, any person or system that downloads the project will have the same version as the rest.

Once installed on a system, Composer allows through the use of its commands to locate, download and install the necessary dependencies with their required versions through a connection to an external repository for PHP resources called Packagist that we commented before and from where it extracts all the resources it needs. And for all this it relies on the file composer.json, whose minimum registration unit is the following:

Composer is in its branch / version 1.10 in Github but there is a 2.x version of Composer in progress and performance tests seem to give it an incredible improvement in RAM consumption. And these are very very good news -I’m pretty sure-. Mike Anello @ultimike has also published an article reviewing the performance of Composer 2 on his drupaleasy blog: Composer 2.0-alpha2 performance comparison (speed and memory).

In orde to use Composer & Drupal, you have two main options: You can download an install it in your Operating System or You can use it from a containerized solution with Composer installed: solutions like DDEV have already Composer in its web container and ready-to-work[1].

But if you want to run Composer in your system, you can install the tool. In this step we’re going to install some resources like curl (to download and get info from remote scripts) and git (for the section where we’ll applying patching to Drupal using Composer).

Follow these steps if you are in Ubuntu / Debian (my main scenarios) or adapt the instructions to your system[2]:

1- Update, install dependencies and get the installer

2- Review the security of the installer using the hash value

3- Check the output for the installer

Check the former output by prompt: if the output says Installer corrupt, then you’ll need to download the installation script again and check that you’re using the correct hash. Then repeat the verification process.

To install composer globally you have to use the following command which will download and install Composer as a system-wide command named composer in /usr/local/bin:

Ok, now just launch composer and get the initial screen of Composer by prompt. Something like this, and old message from a Composer installation in one of my laptops (from 2018): 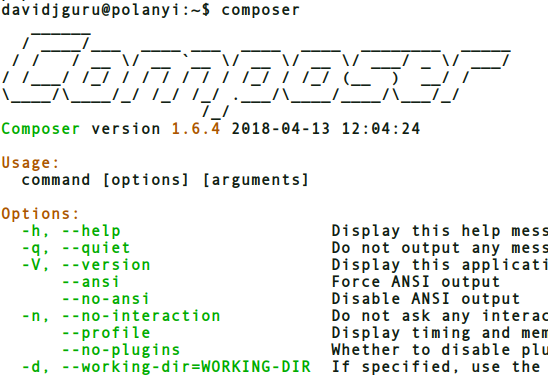 In order to update Composer, you can run:

And it will replace the composer.phar with the latest available version:

In this section I have tried to gather the ten most common commands in the day-to-day working with Composer & Drupal.

The first command will create a new project in your current location, getting the requested template from Packagist.org (downloading a composer.json file model) and then executing composer install in order to run all the dependencies annotated in the former composer.json file.

Remember: You always request a resource from a vendor/provider using the form: vendor/resource:version, although the version can be implicit or explicit (annotated or not). Let’s see.

Now you have a Drupal codebase in your local system (that you need to install).

Maybe the create-project Composer command be the most complex instructions due to the big list of options that it have. You can take a look here: getcomposer.org/doc/create-project.

The second most basic command is the instruction for downloading resources and dependencies.

Or you can simply ask for the last available version of a resource. Now I’m going to install Drush (and all its related dependencies): 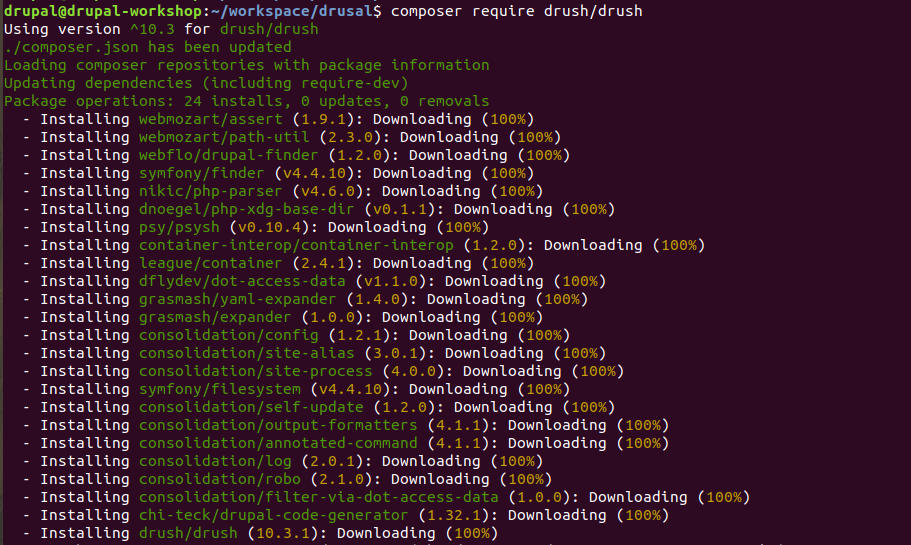 Return a list of available packages for your installation. If you give a name, search the package or will show the package data:

And now getting info about a certain resource:

This command shows a list of packages with availables updates, writing the current value and the latest versions. Is just like an alias for composer show -lo:

And is using a color code for the output, the color coding is as such:

Check the current status of your Composer installation.

When I run the composer diagnose command, I can see the values of:

Get more updated versions of resources, and is aliased as composer upgrade.

Update Composer to its latest version.

(It’s me updating Composer in the web container from a DDEV installation).

Search for a name in the remote repository.

This command will delete all the cache directories of your Composer installation.

Show wich packages depend on a certain resource.

Ok, are you sure about you composer.json file? Check if it’s valid and well-formed executing this command, returning fails and format errors. Don’t check line-to-line with your eyes, use validate.

For many years and against the omnipresent mechanics of Git-based graphic platforms (Github, Gitlab, Gitea, etc) with merge-requests and pull-requests, advances in Drupal have always been determined by the generation of patches.
This can be seen in each Issue of each module, core, theme… in each of them there is a conversational thread with code contributions in a specific format that if valid, will be added later to each project.

And a diff is easily obtained from git like this:

So, basically, a patch is just a git diff dumped into a plain text file:

But when we’re in a Drupal context and the module for patching is a contrib module, you have to respect some guidelines when you create the patch file, naming so:

The last is the form I’m using in some Issues, e.g in the Drupal 8|9 migration of the Humans.txt contrib module:

In addition to using Composer to install / update dependencies, you can use Composer to apply repairs in a “patch” format, applied as resources and managed by Composer through its Plugins.

In Composer, plugins are functional extensions that can be added to increase your options. You add new extensions to Composer as you add new dependencies. For example, in order to use patching, you can add the next Composer Plugin: github.com/cweagans/composer-patches created and maintained by Cameron Eagans, @cweagans.

First, install the patching Plugin requesting it like a new dependency:

Second, add a new section in the "extra" section in your composer.json file, writing the new piece using the form:

Where “ANY_STRING_TO_DESCRIBE_THE_APPLYING_PATCH” will be the output from prompt when Composer execute the patching.

Third You can add many patches as you need, apply:

Fourth You can put your patches in a separate file, just doing:

And then creating my own external patches file composer.patches.json:

How it works: Well, wen you add a new patching piece, the Composer Plugin take actions and goes to processing the patch and apply it over the named module or resource.

You can see the actions from the repository of the plugin, starting in line 373, just here github.com/cweagans/composer-patches/#373.

Where at one point:

But there is another key in the instruction, the use of the option --check for Git. This option prevents the application of the patch if it detects errors in advance, so your patch may not be finally applied (this is especially important for patches created locally and managed from another folder, more prone to failure).

Or if git apply fails, then will launch the patch command, see line 432:

And all will be executed the next time you run composer install.

In this section I would like to gather some mistakes I have made / observed working with Composer and Drupal when applying patches.

Sometimes in contexts where we have not participated in their installation (external systems, already built Docker containers, etcetera), application errors occur just without feedback.
Simply compose runs but the resource is not patched, it stays the same.

In order to avoid this fail, Is important run the command composer diagnose: this instruction review all the required resources, versions and current status of each, giving you a detailed feedback from your prompt (See the example in the former section 3- Ten + 1 basic commands for Composer / Composer Diagnose).

Please, after the feedback from composer diagnose, review some basic resources. For example, when using composer patching, we’re doing a sequence

So, ensure you have installed some related tools like:

To download external resources from your machine, supporting https, with curl (if need) some extra resources like git. Is git installed and configured on your sistem?…

Sometimes git can’t apply the patch because of a specific permission setting on the resource’s destination folder where it can’t write.

If a patch cannot be applied (due to diverse reasons) the patch will be skipped and the process continues. If you want stop the processing just after the error, then you can add one specific instruction composer-exit-on-patch-failure": true inside the extra section of the composer.json file:

4. Getting patches from HTTP

Sometimes Composer blocks you from downloading anything from HTTP URLs, but you can disable this adding a secure-http setting parameter in the config section of composer.json.

This occurs (for example) when your patches are located in an external directory but within your corporate network, accessible from uncertified HTTP.

Review the tutorial series about how to install Composer in diverse Ubuntu / Debian versions, from Digital Ocean.