The latest version of PHP (PHP 8) was released recently, maybe at the end of November 2020 (almost a month ago) and a lot of articles has been dedicated to its new features, changes and advanced updates of the most popular programming language for web. I would like to write about this new version, but instead of talkin’ bout features, I have been thinking about performance.

I was gathering some notes, writing down texts about Drupal performance for my site therussianlullaby.com, when suddenly I realized that I didn’t know if there had been any progress on perfomance issues. What could I do? Well, between continuing to prepare materials for my next article in English, some new tutorial in Spanish that will be published soon and the daily hours of work itself…I had very little time to take a deep look at it. I needed something fast, direct and that would allow me to evaluate results with simplicity. So I started to play a little with .php scripts.

I have written down here the tasks carried out these moments, in case you want to explore and reproduce it in your environment. My main goal here has been to make some observations about the performance of certain actions in a PHP context over several versions of the language and its engine. All these small exercises have been executed in a context based on DDEV-Local, the tool for the implementation of development environments based on Docker and Docker-Composer. If you don’t know the tool (you should, I recommend it), you’d better read this before. Some links about what it is and how to install it:

This is the summary of my test environment and the sum of hardware and software virtualization that I’m performing:

Let’s get to work! First, You’ll need some diverse environments for your comparative study. As my idea is to establish a comparison, I will need several tools: different versions of PHP and scripts to create resources and be able to make measurements about Memory Consumption, my first key indicator for this testing. For the different PHP versions, I rely on the immense facility provided by DDEV as a tool to deploy projects in the PHP version we request. Using it I will create three different projects with its associated containers networks and its PHP versions installed at three milestones: PHP5.x, PHP7.x and PHP8.x.

Creating specific environments using DDEV is quite easy, you only have to install DDEV in your system and ask for a new build. Just select a config option in the response by prompt:

As you can see you can pick diverse technologies as WordPress, Typo3, Laravel and the latest versions of Drupal. You can also choose PHP basic config, installing PHP 7.3.24 as default. 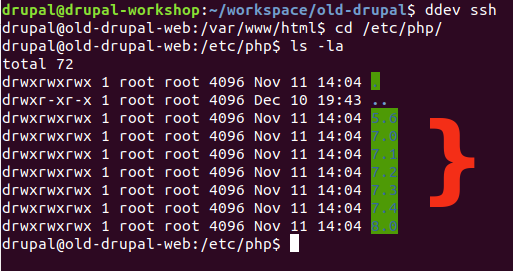 You can request a specific version of PHP in the same initial line of the DDEV config command, in this point:

In this case, the default implementation of the DDEV-related containers for Drupal 9 is build with PHP7, but with a little change you can enable PHP8. Just stop your container network doing:

After that, change the php_version param in .ddev/config.yml and then restart the containers:

So, after restart, You’ll be able to connect to the main container and get the PHP version:

Let’s review some key issues for this little home experiment, some important ideas to know about the PHP context.

For many people PHP is just like an interpreted C that you can use in HTML documents. It’s a big simplification, but somewhat controversial: there are aspects that are directly related and others that are not. PHP is a high-level programming language built in C to facilitate the development of web resources, which still maintains elements of the low-level C.

Some of this basic elements from C are an importante key in the way we understand PHP and its performance. Let’s see just a pair of items:

As you know well, PHP is a dynamically-typed language, and the zval is ready to storage different types. In memory, zval is using two 64bit words, in this order:

Get more info about zval:

In this image you can see the model from the book PHP 7 Data Structures and Algorithms, by Mizanur Rahman: 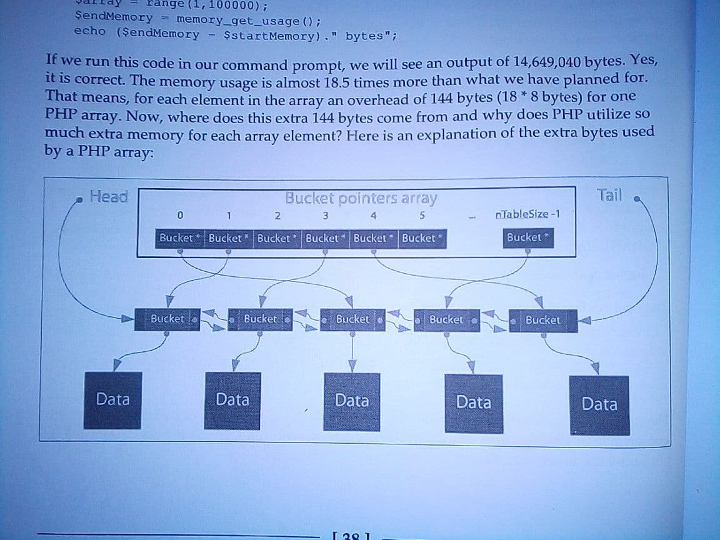 Get more info about arrays:

This is a system that allows PHP cleaning the memory. You can enable or disable the funcions using some parameters from the code or from internal config files. How it works? Well, we already know that a variable in PHP es stored in a container called zval, from C language. Here we’re storing the type of variable, value and some pieces of info:

So, periodically, some algorithms are reviewing the variables and resources, deleting the unusued registers.

For cases of cyclical references, then PHP is using the algorithm created by Bacon and Rajan, present here: researcher.watson.ibm.com/Bacon01Concurrent.pdf. And here is a short version: php.net/features.gc.collecting-cycles.php.

For Garbage Collection, we have some params available in php.ini: php.net/session.configuration.php

In general terms, we’re configuring this in the php.ini file:

But in the Drupal context, we can change these values from a Drupal installation, inside the file ‘services.yml’ in docroot/sites/default/:

There’s a set of PHP functions linked to the memory consumption ready-to-play.

I commited the related scripting here in my Github repository:

For this case, I’m creating an unique variable with a string value taken from chiquitoipsum.com/, in a loop from the first to 100000 iterations (100K variables created) over the memory system.

In this block, I’m watching the real memory consumption, comparing memory_get_usage() (for the whole script) and the allocation only for the variable. In this case I’m using strlen, that returns number of bytes (in the character set, number of bytes = number of characters, due to the asignation of 1 byte = 1 char). So I’m getting the values:

As you can see, the values differs.

This is my testing script: github.com/davidjguru/show_memory_usage_using_variables.php.

And here are the results: 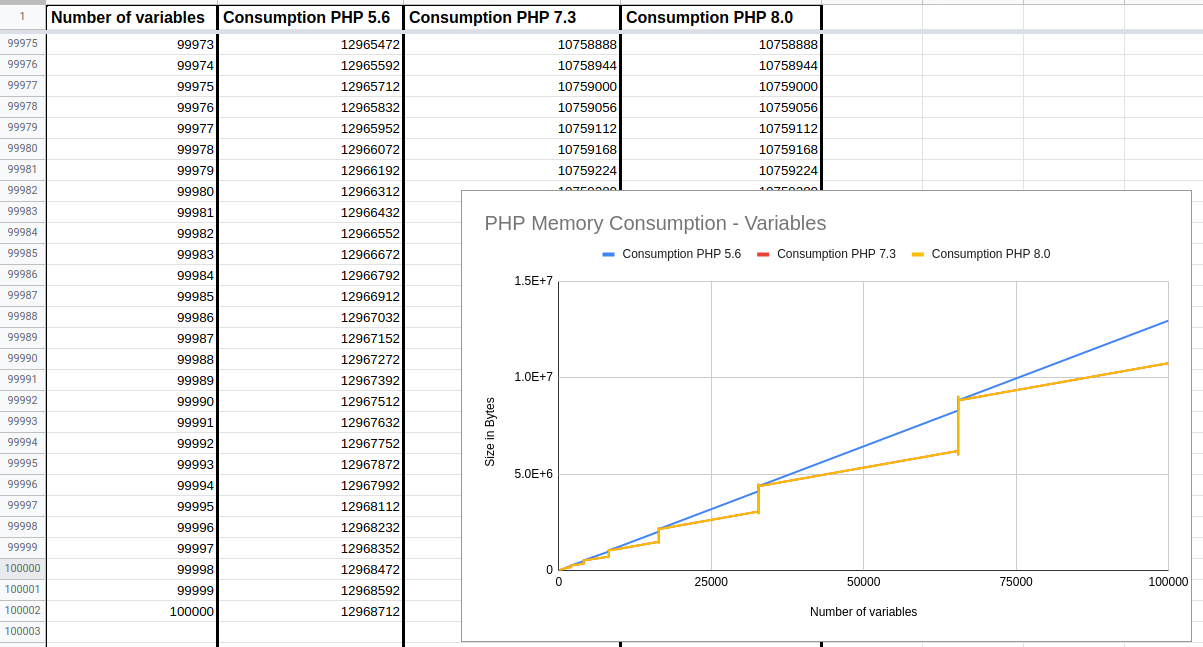 Showing the size in bytes, from zero up to 15MB (y-axis).

Ok. Here we’re measuring some paradoxes from the PHP Arrays. Arrays in PHP are not - strictly speaking - fixed-length array structures (as in other languages). In fact is more like a HashMap, with a lot of data structure. In this script we see what size a 100K element array occupies in memory within a 64-bit architecture system and we compare it with the use of a fixed and determined length array. For the fixed-legth array, I’m using the SPL Extension for PHP, and the SplFixedArray Class for building this kind of arrays.

Let’s think about an idea: In 64b - Architecture, one integer in format “long” is build using 8 bytes*, so theoretically for an 100K items array, we’ll use 800.000 bytes (0.8 MB). But the results are returning differents values (due to the implementation of arrays in PHP showed in the former section). 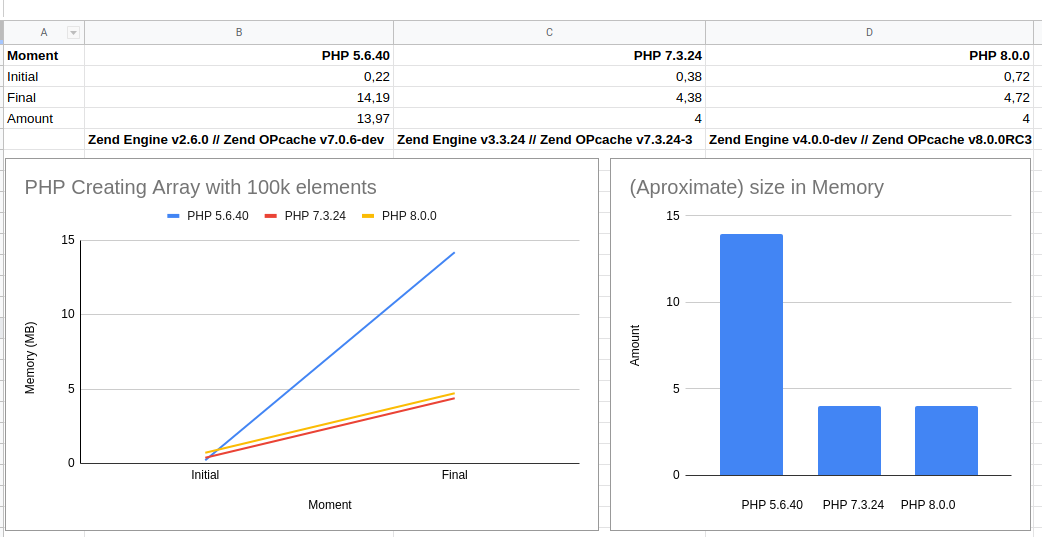 Here we can see the direct effects of the changes in the implementation of the zval structures from PHP 5.x to PHP 7.x: Now the arrays are more lights. let’s remember a previous calculation: Just for an array with 100K integer items = 0,8MB. But in PHP:

There is almost 10 MB difference from PHP 5.x, but it remains the same in the latest versions.

Here I’m using just a basic PHP class with a single property, and then creating by 100K PHP objects. 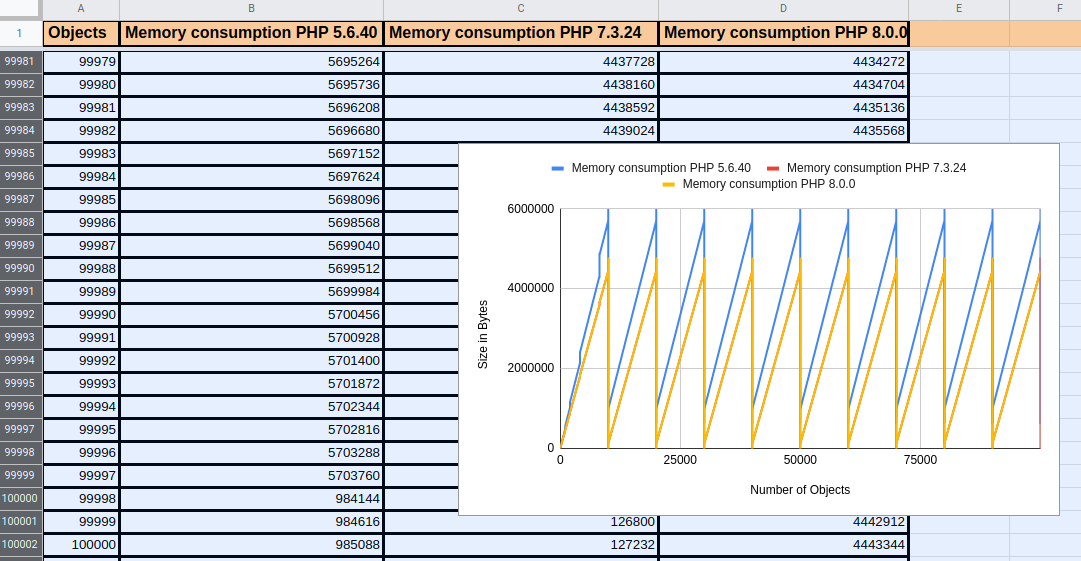 We can see the memory consumption peaks, just before the launch of the PHP garbage collector (explained in a previous section to give context), which releases memory and periodically lowers the consumption values.

Finally, after comparing in the three previous sections the memory consumption in the three versions of PHP, it seems that the last one available (PHP 8) is similar in this dimension to the operations in memory of PHP 7 (in most tests the graphs of 8 and 7 overlap with the same values), and also moves away from the memory management of PHP 5.